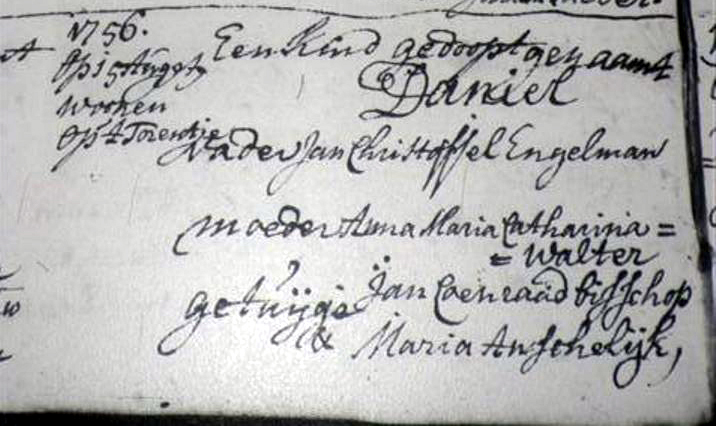 Baptism Record of Daniel Engelman from Velsen Reformed Church
In Holland, Daniel was a member of the Surveyor's Guild. Amazingly, some of his work from the early 1790's can still be seen posted online such as the link below from the Tuinhistorisch Genootschap Cascade (Cascade Garden History Society). From: http://www.cascade1987.nl/engelman-landmeter-van-de-haarlemmerhout-biedt-zich-aan/ (Google Translation from Dutch) Engelman, surveyor of the Haarlemmerhout, offers himself
Posted 11 June 2018 Haarlemmerhout (Haarlem, 1792), Daniël Engelman Source: Noord-Hollands Archief In 1792 a series of advertisements appeared in which the map of the Haarlemmerhout by Daniel Engelman was offered for sale; 20 St. in black and 30 St. colored. The series of advertisements continued in 1793. One of 27-7-1793 in the Oprechte Haerlemsche courant has a nice addition: "Den HAARLEMMERHOUT, in its present situation, signed by D. ENGELMAN, commissioned and ordinary surveyor of the mentioned city, and brought into copper, by J. VAN JAGEN; is published in Haarlem ...NB. The above-mentioned D. ENGELMAN offers his service, above measuring and chartering, ie within or outside the province of Holland, the construction and modification of Pleasures, Gardens etc., in today's taste, to a moderate reward; address to the aforementioned D. Engelman, in Haarlem." You would almost think that Engelman is "inspired" by an already well-known Willem Arentz advertisement from two weeks earlier: WILLEM ARENTZ, admitted land surveyor, having learned the landscaping of English gardens and plaques, first under Mr Michel and now in England over the two years, offers his service, either in or outside the province of Hollend, for a small wages, to first give proof of his case and to obtain recommendation, for the construction of pleasure gardens and gardens; his address is by Monsr. Krieger, in the Haarlemmerhout, or by the Wed. Arentz. in "t Dorp Wassenaar." In an issue of Ons Bloemendaal I read: "Daniël Engelman was a land surveyor, architect in the earthworks and gardener in Haarlem. He lived on the Kruisweg in Haarlem. He received his admission as land surveyor from the Court of Holland on July 15, 1789. In 1790 he applied for a position as surveyor of the city of Haarlem and submitted a map of the Haarlemmerhout as proof of his ability. On September 13, 1791 he was registered with the Haarlem Guild of St. Luke. In the same year he made another drawing of the Hout, but now the part east of the Dreef, to record the agreements that had been made between Henry Hope and the city council regarding the view of Hope's country estate, Welgelegen. - Jan Holwerda - Haarlemmerhout (Haarlem, 1791), Daniël Engelman; belonging to contract between the municipality of Haarlem and Henry Hope van Welgelegen Source: Noord-Hollands Archief A map made by Daniel Engelman in 1793 is pictured here below. Click on the image to see it in a separate tab. Once there, click on it again and see a larger version. 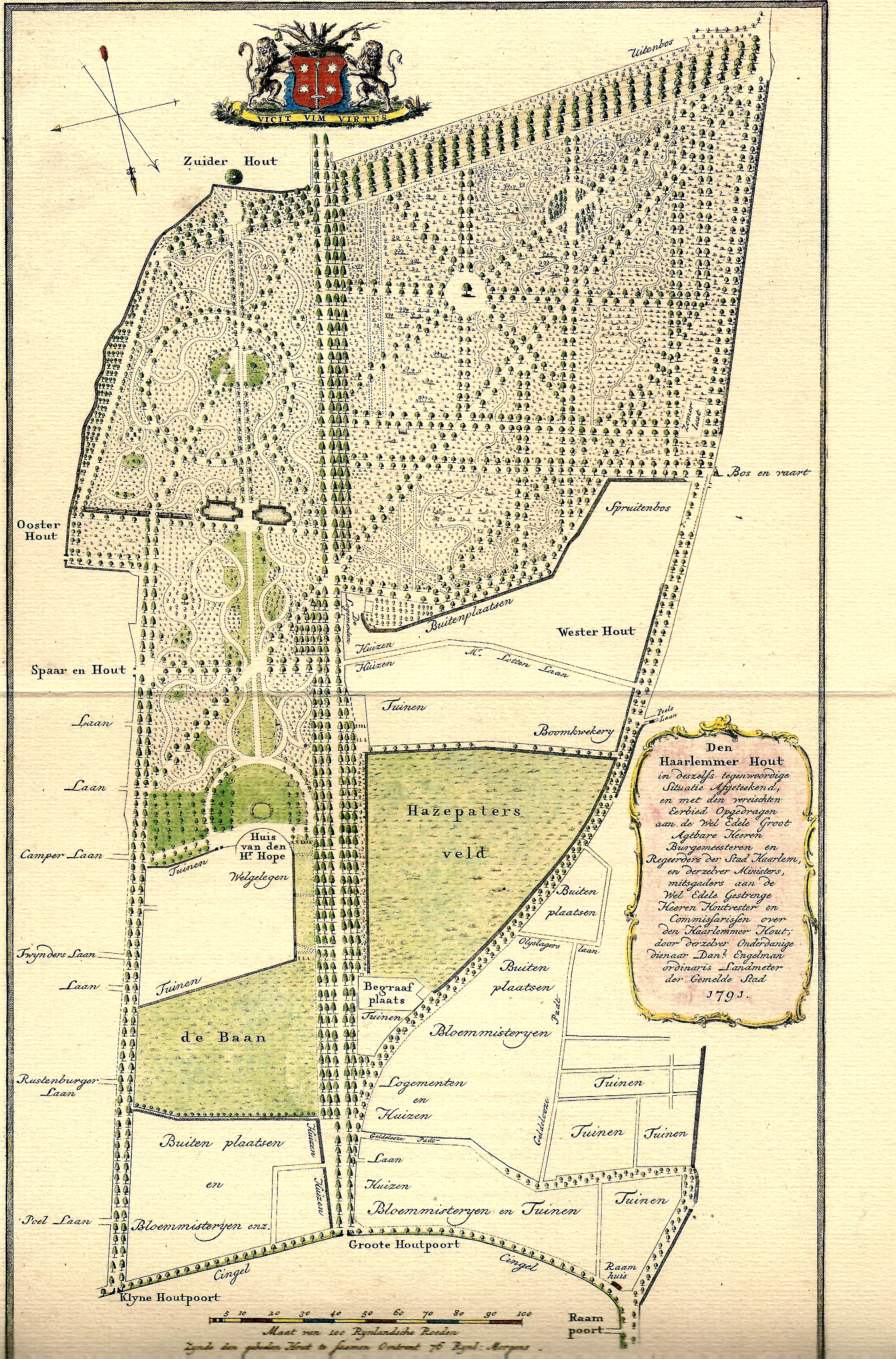 The Surveyors Guild disbanded in 1795. It coincides with an invasion of the country by the French, which was probably a major factor in Daniel's decision to move to the New World that same year. In a Wikipedia article about Haarlem in the late 18th Century, it says: 'On 18 January 1795 the "Staatse" army was defeated near Woerden. During the night preceding the 19th, the same night that stadtholder William V of Orange fled the country, the various commissions gathered and implemented a revolution. The commissions changed the city's administrators in a bloodless revolution, and the next morning the city was 'liberated' of the tyranny of the House of Orange. The revolution was peaceful and the Orange-loyal people were not harmed. The Batavian Republic was then proclaimed.' The French army entered the liberated city two days later, on the 20 January. An army of 1,500 soldiers was provided with food and clothing by the citizens. The new national government was strongly centralised, and the role and influence of the cities was reduced. The Batavian Republic had signed a mutual defense pact with France, and was thus automatically at war with England. The strong English presence at sea severely reduced the trading opportunities, and the Dutch economy suffered accordingly. Once in Philadelphia, Daniel had the skills and business acumen to adapt to his new surroundings in an enterprising fashion. From: History of Philadelphia, 1609-1884, Vol II. Chapter XXIX. Amusements of the Philadelphians, Page 943 Author: Scharf, J. Thomas (John Thomas), 1843-1898. cn; Westcott, Thompson, 1820-1888, joint author Volume: 2 There were some nurseries and botanic gardens which, being established originally for the cultivation of flowers, trees, and plants became, in consequence of the elegance of the manner in which they were laid out and the attractions of the gardens and floral splendor, places of resort. Some of them furnished refreshments, edible and potable. Among the former were tea, coffee, milk, relishes, soups, etc. Some of them sold liquors, the most popular of which among those resorted there were mead, metheglin, malt beverages, ice cream, etc. One of the oldest was that of Daniel Engelman, florist and seedsman. He was a Dutchman from Harlem, Holland, who came to Philadelphia in 1759*. At an early period he established his nursery and garden on the north side of Arch Street, between Schuykill Seventh [Sixteenth] and Schuykill Eighth [Fifteenth]. He was still at that place in 1822. After he relinquished it, and about 1826-27, Thomas Smith became proprietor, and opened it as the Labyrinth Garden. *[Note: Arrival date should be 1795, not 1759.] Daniel's propensity to promote his business endeavors also didn't stop in Haarlem. Once in the United States, he advertised locally in Philadelphia-area newspapers. Below is one such advertisement that appeared in the True American and Commercial Daily Advertiser on 21 November 1804:

He also placed ads in Aurora General Advertiser, another Philadelphia paper. Appearing in the True American and Commercial Daily Advertiser on 17 Dec 1807 was this: Five Dollars Reward Stolen or taken by mistake yesterday morning from Arch street, between 2nd & 3rd streets, a Horse and Cart- the horse a sorrel, between three and four years old, bald face, hog mane, and hip shot on the near side- the cart about one year old and painted yellow, with one shaft nearly new, intended for 2 market cart. If stolen, the above reward will be paid by delivery of Horse and Cart, No 149 North Water street, or to Daniel Engleman, adjoining Sheridan's Ferry and Schuylkill. December 17 I wonder if he ever got them back! Daniel was married to Francina Kol on 4 Sep 1785. She was the daughter of Jan Kol and Marijtje Van Der Linden. Together Daniel and Francina had six children: 1) Jacob, b. 1788, d. 1849
2) Jan Christoffel, b. 1790
3) Aagje Maria, b. 1793
4) Abraham, b. 1794
5) Daniel Wilhelm, b. abt 1798, d. 1841
6) Samuel, b. 1803, d. 1885
The two youngest children were born after Daniel arrived in the United States in 1795. Daniel Engelman died on 13 Oct 1830 and was buried in the now-defunct Race Street New Cemetery.  My many thanks go out to Liane Fenimore, who was instrumental in breaking down these Engelman brick walls.

It Started in Haarlem... 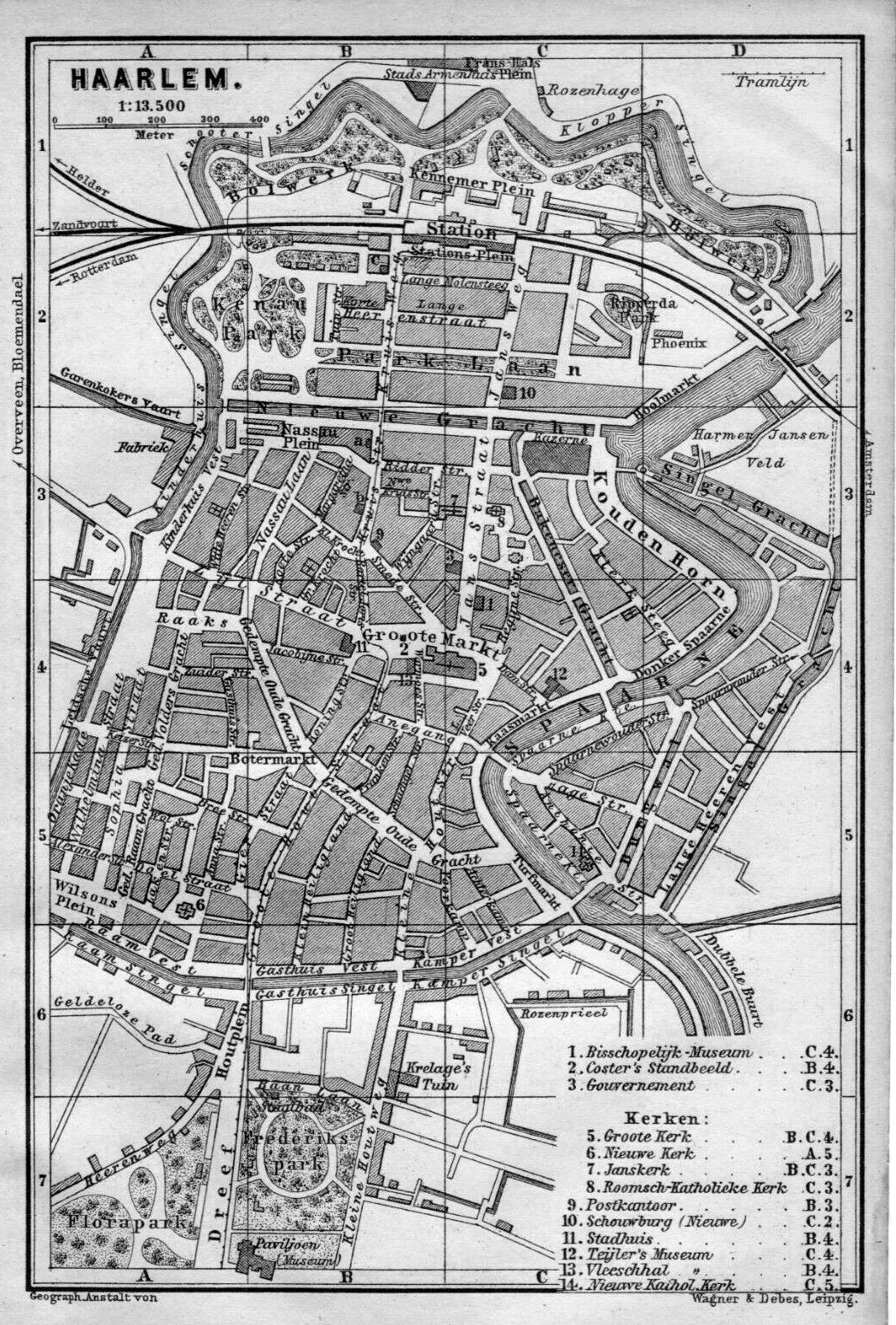 The surname of Engelman emerged in the ancient German province of Westphalia, which lies between the Rhine and Wesser rivers. Two of the common types of hereditary surnames found in the Westphalia were patronymic surnames, which were derived from the father's given name, and metronymic surnames, which were derived from the mother's given name. The surname Engelman was derived from various Germanic personal names. The name Engelman is a short form of given names such as Engelbert or Engelhard. The surname Engelman was first found in Bremen, where the name contributed greatly to the development of an emerging nation which would later play a large role in the tribal and national conflicts of the area. In later years the name branched into many houses, each playing a significant role in the local social and political affairs. In the medieval era, many different cultural groups lived in the German states. There are thus many regional variations of German surnames from that era. Westphalians spoke Low German, which is similar to modern Dutch. Many German names carry suffixes that identify where they came from. Others have phrases attached that identify something about the original bearer. Other variations in German names resulted from the fact that medieval scribes worked without the aid of any spelling rules. The spelling variations of the name Engelman include Engel, Engels, Engell, Engeler, Engeli, Aingel, Aingell, Aengel, Aengell, Aingeler, Engele, Aingele, Engler, Engebretson, Engelbrekt, Engelbretson, Engebrecht, Engelbrecht, Engelbrecher, Engelbert, Engleman, and many more such as Ingleman and Ingelman.